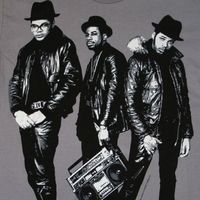 Yo, yoAyo I've seen Run with the chrome spittingWatching the Knicks in the back of the 6Pulled up on the side like who's winning?Niggers said me since 83' get it rightThe lightly flashers rolling been dimpled to lightNext night seen him on stage with some platinum sellsRubber gets him aside that's Bill Raising hellI said Run the crowd yells, likely paid it wellThen he said to ask (??Burt Bordello??)...Who the hell?Oh well I thought I was done being impressedUntil my man called me up and told me listen to flexI ain't know what to do, looks like Run was sending to everybodyBut then again the shit was trueMC's must sworn and gone hopping on thronesSaying native kings please you kept the C onAin't nobody better than this twenty year veteranEven as a reverend, hotter than you've ever beenIt don't really matter who the hell you areThe fake is a full catcher, the biggest to starsTrying to doubt these three, you're breaking the lawTheir the Kings leaving y'all and all, it's real pos like:

Ahhh Rev Run, run the blockSwirls the doc, my flow is hot, don't need no gun to cockI'm sick of you dogs, you brothers try to get me to fallI'm kicking you raw, even in the fist of it allRun laps around wack cats I hate thatSince way back, main-way tracks I lace raps, you'll face thatBefore you catch aluminium bats from numerous catsWith Run-DMC on their hatsYou ain't getting no show till your album outThe label that want us been money or what's that aboutNo clout had to settle for a fake amount,Well, my catalogue's bigger than your banc accountNo doubt I'm the greatest of all time for sureRev Run coming through and leaving niggers at allLike...

Hey Run, remember that night at the light in the back of the 6?Yeah I was mad the Knicks lost I got a new willYeah I see the belly and nage with the four doorsWhat is that? More whores?Naw, it's simply more toursI see you've repeating me for quite some time (yo my bad)Ain't a thing they got noticed through rhymesAyo what a nigger gotta do to be more like you?A nigger like me ain't got a clue...First things first, I DJ, run all the rappers, actors came onstatusBut they can't have this, since Krush Groove you were makingthem pacedAnd let them rap movies be made, since then most of them faintThanks for the compliment kid, now jump back in your carsThe rev is leaving niggers at all, it's real pos like