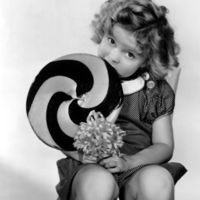 Leo is on the Air!

This is your Hollywood radio reporter, coming to you from the littletheatre in the Metro Goldwyn Mayer Studios.

One of these days someone will write a history of motion picturesIt's going to be an exciting story of dreams and ambitions, of hardwork and faith, of disappointments and overnight triumphsIt will be a story of unusual people...And away up top and important,you will read about a young lady who is here nowYou will meet her in a momentBut first I want to tell you something about her

She made her first appearance in 1928She was born that year on April 23rdFor her the years of obscurity were fewIn 1932 she made her motion picture debutYou liked her, in fact, you raved about herBy 1934 she had become motion picture's No1 attractionYou and your next door neighbor were completely captivated,when you saw her as, Little Miss Marker

Before the year was over you had gone back to your favorite theatre,to see Stand Up and Cheer, Baby Take a Bow, Bright EyesThat same year, the Academy of Motion Pictures Arts and SciencesBestowed upon her a special award for her outstanding contribution to the screenShe has appeared in 20 hit pictures since thenPictures like Little Colonel, Captain January, The Littlest RebelAnd The Little Princess

You've laughed with her, yesAnd you cried with her tooYou'll remember her best as a chubby curly headWell you should see her today, quite tall, poised, still smilingHere she is now.Ladies and GentlemenMiss Shirley Temple

Thank you Shirley, thank you for a swell job.And after this I won't object to answering the questions.Ladies and Gentlemen, you've been listening to Shirley Temple,Herbert Marshall and Gail Patrick in several scenes from the motionpicture, "Kathleen".This is your Hollywood radio reporter saying, thank you for listening.